I'm having issue with line chart as some data are displayed off chart as seen in the screenshot below. Is this a rendering issue from browsers or a bug ? 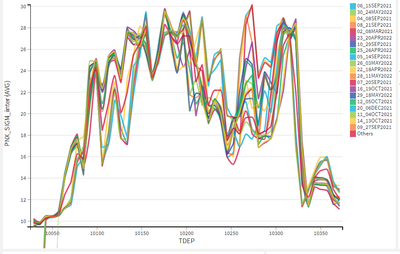 Thanks for writing in! What browser are you using here? Have you tried any other browsers? I've tested this on Chrome v104.0.5112 and was not able to reproduce a similar output. If you're open to sharing a sample of your data, please feel free to privately message us via the live chat option on our website.

I see that you are using Dataiku DSS V10. something...

I know that Dataiku DSS V11.0 is now released.  I expect that an 11.1 will be out sometime soon.  I note that V11 has a bunch of chart improvements that have been put in place.  I'm enjoying the update.

I'm wondering if using V11 might help things, and what version @JordanB you were using when you were testing.  Over the years I've noticed a number of strange things that have happened to the x-axis on DSS Line Charts.

I migrated the project to DSS V11.0 and the problem still there.

tgb417
Neuron
In response to galghaith

That looks worse.  Do you have a support ticket open on this?

I’m also wondering how many datapoints you are trying to render in this chart.

Please open a support ticket for this.

I was unable to reproduce with my own data running v11.0.1.