We activated the 14-days trial. I set up a partition for a remote file connection: 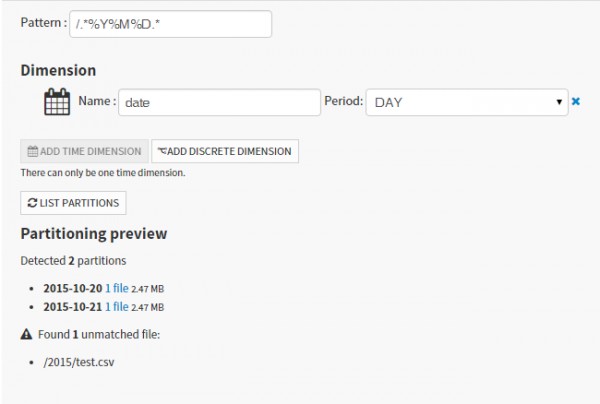 Then in Input/Output, I am asked for the partition Id. I tried "date" then save but the field remains blank when I reload the page.

EDIT: The question is actually about partitioned Remote files. The syntax here is that:

ie, in the URL it's the same syntax as the "partitioning variables substitution" that you would use in recipes.

I'm assuming that you're asking about the partition which is requested when you try to build a partitioned dataset from a recipe.

What you must enter is the identifier of the partition to build.

Assuming that you have a recipe that makes A -> B, and A and B are both partitioned by day, and you have an "equals" dependency, then you would want for example "2015-10-21" as partition id.

* http://doc.dataiku.com/dss/latest/concepts/index.html#partition-level-dependencies and the concept that you ask for output and then DSS finds the input

* How partition identifiers are formed: http://doc.dataiku.com/dss/latest/partitions/identifiers.html

Romain_NIO
Level 2
Author
In response to Clément_Stenac
In fact, I try to set up a daily scheduled file import from a sFTP to get the current day csv into a dataset.
Can I put something like "CURRENT_DAY"? Is it normal the "Download sources" remains quiet no matter what I try? (2015-10-21, date, day=2015-10-21...)
0 Kudos
Reply

jrouquie
Dataiker Alumni
In response to Clément_Stenac
Partial answer: CURRENT_DAY woud be used in administration → scheduler, where you can ask a recipe to run each day and build the partition of today. When manually launching a job, you need to specify the partition to build as 2015-10-21
0 Kudos
Reply

Clément_Stenac
Dataiker
In response to Clément_Stenac
Ah sorry about that, I hadn't understood. What you want is ${DKU_DST_date}, ie it's the same syntax as the "partitioning variables substitution" that you would use in recipes.