I've been working on a number of file systems to process data about the files on various disks.  The flow zone I've created looks like this. 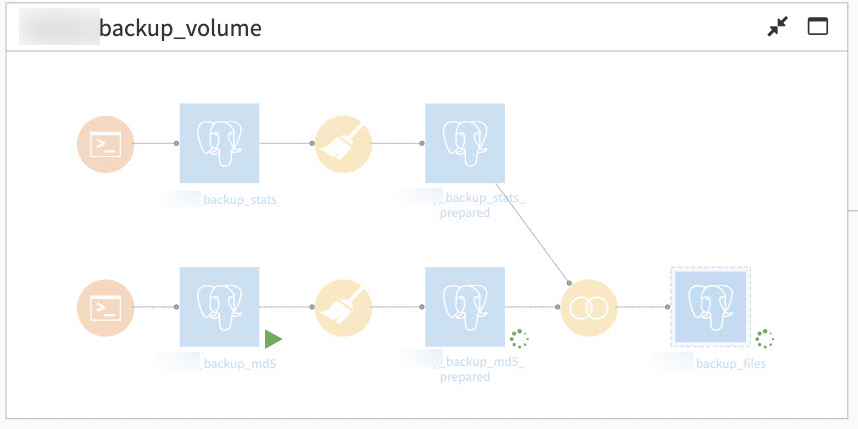 There are two simple shell scripts that gather data about the same file volume, two preparation recipes that clean up that data, and 1 Join recipe that brings both sets of data together about the one file system.

For each file system I'm processing I'm creating a new flow zone. With the same steps.  I have to repeat this for a number of volumes attached to my host.  And these volumes will change over time.  Therefore the only real difference is the path where the files come from will change.

Part of the reason to breath the flow zone into two paths at the beginning is that I want to be able to control when each of these recipes runs.  Because the MD5 shell scripts take about 3/4 of an hour for every 100 GB that I need to process.  Where pulling the stats about files takes 1/10 the time.

My question for the community.  Has anyone worked out a way to re-use a single flow zone for multiple datasets?  This would save a bunch of time copying flow zones.  It would save time managing multiple flow zones, and increase reliability because all datasets would get the same processing.

Thank you so much for the post on Community.

I hope this would help.

Application-as-recipe looks promising. However, I feel like I need a few more details about how to use this feature set.  Is there any training material or more detailed examples on the use of this feature?

Oh, I think I may have found some additional information that might be useful to me to get started. https://knowledge.dataiku.com/latest/courses/o16n/dataiku-applications/create-app-as-recipe.html

@tgb417 Yes, you can refer to the knowledge base article you mentioned for the details of the feature. Please let us know if you have any further questions regarding the feature.

How do code updates work in the Application-as-recipe senario.

I’ve worked my way through the knowledge base article on application as recipe, and I have been able to make it work as written.  However, this is a  very specific multi step recipe on making a section of the haiku t-shirt example into a reusable component.

However, I’m having a hard time generalizing this specific set of instructions into a better understanding of Dataiku applications and more specifically application as recipe so that I can create my own to do the kind of thing I’d like to do.  Is there a more general set of instructional material on this subject that would scaffold the purpose for taking each of the steps listed?  With an eye on being able to create other such recipes.

Thank you so much for the feedback. I have shared the feedback with our Educational Services team.

We really appreciate your feedback.

I saw your related post over in Product Ideas:

I'm sure you've thought of this but could you package the process into a Python function and then call that where needed? I'd think you might be able to do this by calling the API to create the recipes needed (i.e., replicating the recipes you have already defined). Or maybe one could do everything directly in Python?

I was excited when applications-as-recipes was first announced but then learned that it doesn't support writing output to SQL table as an in-database operation. I get that this is hard and maybe not doable but it certainly limits the use at least for us as almost all of our processing is done in database on sometimes pretty large SQL tables. I did find as well that the learning curve was a bit steep.

I ended up being able to accomplish the same goal (package common logic for sharing within the company) using plugins (i.e., custom recipes).

We have also developed a plugin recipe to run the script from another recipe. It replaces the inputs and outputs of the other recipe with those of the current recipe and then runs the script. It is limited to SQL Script recipes but it has been a real boon for situations where we want to run the same preparation process for a train flow and scoring flow.

I realize none of that helps you. Just commenting on the theme of wanting to share processes across different parts of a flow.

My use case is about transitioning summary data from just about 1 million files into a PostgreSQL database for evaluation.  Unfortunately, It not SQL on both input and output of the recipe.

I certainly started with Python code and was able to get some of these things to work.  However I ran into challenges with scaling the Python approach on my limited hardware.  In this case I'm using DSS's Shell Recipes because the Dataiku Python library seems to be buggy for me when working with more than 100,000 files in a file system directory structure.  And the performance of the Dataiku Python Library has been between 1-2 orders of magnitude slower in dealing with file than doing things through the shell recipe based approach.

Regarding plugins,  I'm fascinated by this concept I enjoy being able to leverat the many pluging that are out there.  However, I have not fully worked out how to build my own plugins from scratch.  There are several project for which I think this might be helpful.  At some point I'd love to learn from you or someone else more about setting up plugins from scratch.  I've started the academy course.  However, not yet finished.  Is that the best way to learn how to create plugins?

Your plugin recipe to run the script from another recipe sounds fascinating.  I'd like to learn more when we have a moment.

I agree that process / flow reuse is an important area for DSS improvement.  The features may already be available in the system.  However, I think that there are steps that could be taken to get this to a level of simplicity that we could consider plugin creation to be part of every day AI.

Ah yes, I remember seeing your posts about the Python issues with folders with large numbers of files. Sorry, I had forgotten about that.

One other idea - what about using Python to create the shell based recipes? So you'll get the advantage of using the shell based recipes but you'd have a Python script that manages that and that could be put into a library and called from multiple other Python recipes. I'd think that the Python script would create the shell recipes, execute them, and then delete them when done. I've done something similar with SQL recipes. I could share that if it would be helpful.

On the topic of Plugins... I have gone through the Plugin development course (actually to give feedback when it was first released) and thought it was good. It definitely would have been helpful to me when I was first learning to develop plugins. So yes, seems like a good way to start. Looks like there are a couple of other plugin courses now that look to be helpful as well (all in the DSS Customization area).

We started with plugin macros. These may be a bit easier to understand than some of the others (or maybe I'm just most familiar with them!) Plugin recipes can be super useful though and so worth figuring out how to develop those. We have also developed a couple of plugin scenario components. We have only two actual plugins (utility and production - the first only available on the dev instance and the second deployed to our production instance for use in projects in production). These two plugins contain various components - recipes, scenarios, and macros. We are using our plugins to contain various unrelated components rather than pieces of one solution which is how most of the plugins in the store are set up.

Happy to share more about the plugin recipe that runs another recipe. It has been really helpful. I hated trying to keep duplicate scripts in sync. Maybe we should create a post in the plugins area? There is also the new Inspiration option for sharing tips. Or maybe just direct message me...

Yeah, seeing a bit of the code you use to create other visual recipes from within Python would be interesting to take a look at.

As one of the organizers of the NYC Dataiku User Group.  I'm wondering if I could invite you to share with the community a bit more about your plugin journey.  Let me know what you think in a PM.

Here is an excerpt from something I wrote a while back that shows creating a recipe, executing it, and finally deleting it (while it runs you would see the additional recipe in the UI). I'm thinking something like this could a function in the project library and you'd call it from a Python recipe. One issue to work through is that the calling recipe and the created recipe can't share the output dataset. Note that I edited the excerpt a bit to make it a standalone example but may have missed something.

Plugin is the way to go for what you want. It takes some time but it's not that hard. Give it a go.

With regards to this statement: "Dataiku Python library seems to be buggy for me when working with more than 100,000 files in a file system directory structure. "

There is no bug at all, just overhead of a high level language that is not optimised for low level file system operations like a Linux shell is. I also found issues processing large amount of files using Python. In one use case I had 1 million XML files I needed to process and Python will run like a dog. However there are few tricks you can use to prevent performance issues when handling lots of small files:

In the end this is one of the beauties of Dataiku, you can seamlessly switch between Shell, SQL, Python or Visual recipes and use what's best for each step.