Im using the step Export notebook in a scenario step and sending it as an attached html file using mail reporter. The problem is that the exported notebook will have always “notebook.html” as its name.

Any idea on  how to keep the initial name of the notebook in the project or rename it with a global variable in the scenario steps. The idea is to use the date of the execution of the scenario to rename the Exported file “control_outcome_2022-06-15.html” for example.

There's no way to change the name of the attached notebook, but if your goal is to get the date of execution, there are a couple other ways that you can get it:

This will create 2 new variables called ${scenarioStarted} and ${scenarioEnded}. You can use them in the subject or the body of the email. 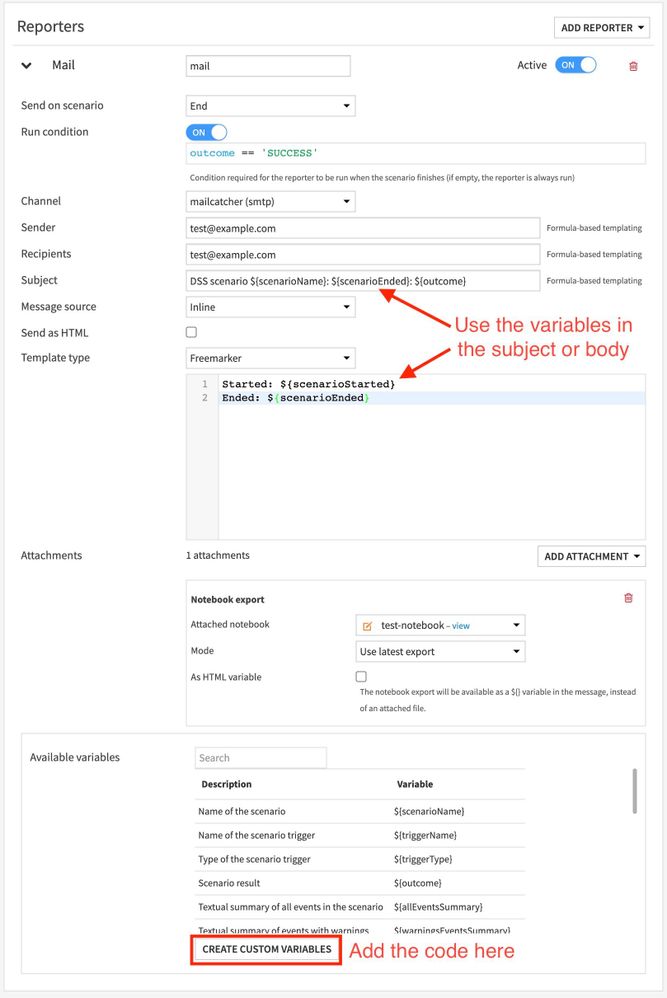 If you have any questions, feel free to let me know.

Thank you for the answer.

Can I at least keep the initial name of the notebook as it is the case when the notebbok is exported manually ?

I just find it a little bit frustrating to have the expoprted file always named as 'notebook.html'.

Thanks for your help !

You can obtain the name of the notebook similarly to method 2 that I described in my previous post. You'll want to use the following code for the custom variable:

This will create a variable called ${notebookID} which is the name of the attached notebook. You can use it in the subject or body of the email like I described in my previous post.

Note that this method will only work if you have a single notebook attached. If you have multiple notebooks attached, there's no way to differentiate between them using this method.

Also, the name of the attachment will always be notebook.html. There's no way to change that unfortunately. Sorry for the inconvenience.

Surbhi2512
Level 1
In response to ZachM

CAn you please direct me towards any documentation where I can find the details on the arguments being passed in this get_variables function.

CAn you please direct me towards any documentation where I can find the details on the arguments being passed in this get_variables function.

I'm using the following custom-variable code in order to see what the arguments look like:

You can then use the following template to send the arguments via a mail reporter:

The already-available variables aren't accessible by default, but you can make them accessible by assigning them to a scenario variable: