Dataset to be saved at root of connection from Dataiku to Amazon S3, how to save my datset properly?

Dataset to be saved at root of connection from Dataiku to Amazon S3, how to save my datset properly?

I want to store the results of the data I processed with Dataiku into an Amazon S3 bucket. I already have a connection from which I can read data but when I try to create a dataset from Dataiku in S3 I have a weird warning and no files: 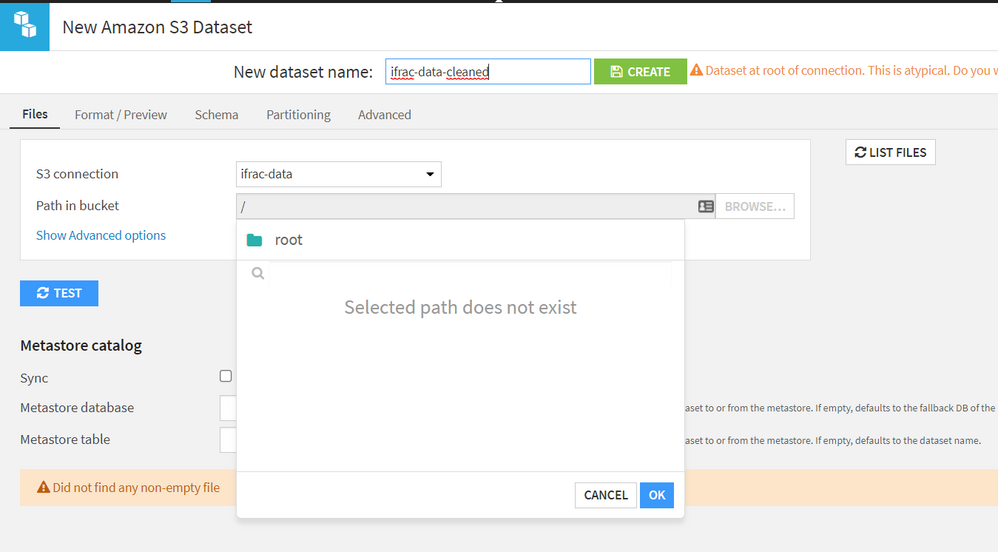 So what did I missed in order to save a dataset into my Amazon S3 bucket? Is it because I am in path-restriction-mode as they talk about in the connection-paths-handling-docs ?

The message: "Selected path does not exist" means the path specified in the S3 connection is invalid (Note: “/Bucket/Path-in-bucket” must exist in S3).

Oh, okay, sure, now it makes sense @dgraham . But I have two questions:

- I did put an actual path now and now I am giving the schema. However, couldn't I use the schema of an existing dataset in my flow?
- I created a test dataset with a "test" column but it seems to be read-only. How can I change that so I can write into it?

If I can't create a just created dataset from my last recipe in Dataiku I was thinking about something else: rather than creating a new dataset downloading the file locally and pushing it manually to my Amazon S3 bucket and then updating it.

In general, transformations (e.g. aggregation, a join, etc.) on datasets in Dataiku DSS are performed via recipes. But, in advanced cases, the "Push to editable" recipe could be used where an editable dataset is needed. This recipe copies a regular dataset (input) to an editable dataset (output) while keeping changes in the output dataset.