The Context for Subpopulation Analysis

For many use cases, the ability to explain or interpret the results of a machine learning model may be just as important as the accuracy of the predictions themselves.

A machine learning model is often labelled a black-box if its inner workings are largely obscured. A white-box model, on the other hand, allows for a more understandable relationship between input features and output predictions.

Subpopulation analysis is an example of a white-box ML technique.

The nature of Dataiku DSS lends itself to white-box machine learning in a number of ways. The inherently collaborative nature of DSS and the ability to trace the lineage of data through a Flow are two fundamental properties that can increase understanding and trust in a model.

More specifically, DSS has features, such as partial dependence plots and subpopulation analysis, designed to make it easier to interpret model predictions.

You can compute a subpopulation analysis after building a regression or binary classification model trained in Python, such as scikit-learn or keras. The purpose of this analysis is to assess whether a model behaves identically across subpopulations.

This assessment is particularly important in a fairness study where you want to examine if a model reproduces biases in the training data. This tool can help users more easily weed out unintended model biases and create a more transparent and fair AI deployment.

This video below gives a brief introduction to the why and how of subpopulation analysis with DSS.

Subpopulation analysis computes a table of various statistics that you can compare across subpopulations that you define. For example, in a binary classification model, computing a subpopulation analysis on a variable such as gender allows you to examine the extent to which model prediction probabilities differ between male and female observations. In all cases, deciding whether a difference constitutes a significant finding with respect to fairness is left to you. 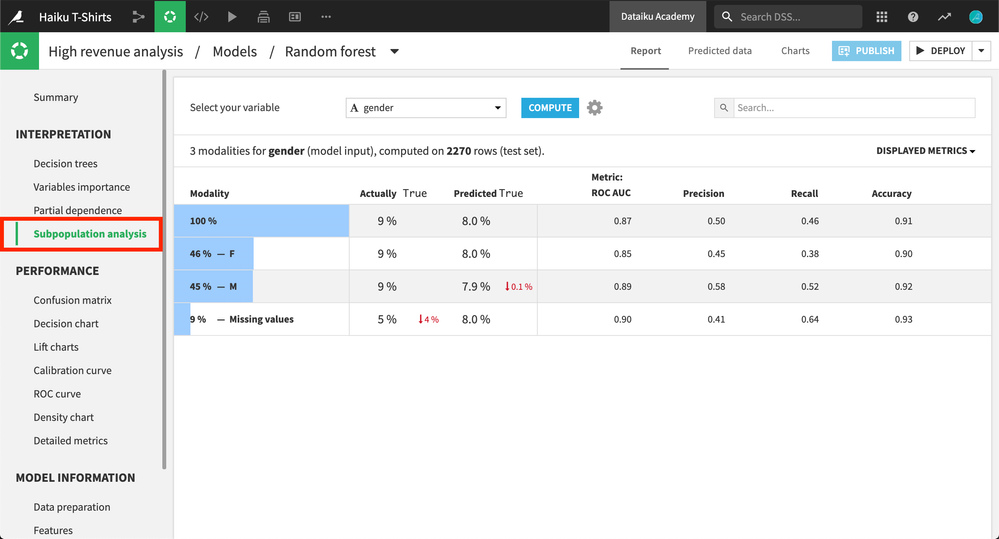 Does the model behave similarly for male and female subpopulations?