I have an enterprise Design Node instance controlled through a Fleet Manager.

I have followed these instructions: https://doc.dataiku.com/dss/latest/operations/audit-trail/eventserver.html

I have also seen several of the other posts here:

I still cannot get the event server working.

What should the port number be?  When I go to the S3 bucket "connection" I want the logs to be sent to, I don't see any port in the URL as some posts have said where to get it from.

What should the "Write as user" be: `admin` or any user that has credentials registered in their Dataiku User's "Personal Credentials" ?  If it is the user name, which user name: `dssuser_first_last`, `First.Last`, `@firstlast` , `first.last@corp-email.com` ?  The user names are inconsistent across the entire platform.

Where can I see the logs of the Event Server?

The instructions tell me to Stop DSS then install the Event Server with the shell command.  However, if I stop the DSS, then I can no longer ssh into the DSS to run the command.  This makes no sense.  This might be because our DSS is controlled by the Fleet Manager, but this is a big discrepancy in the documentation.

To enable Event Server on Fleet Manager-controlled instance you can set event server through FM in the virtual network:

The node name  is the name of an existing node as defined in Fleet Manager( doesn't have to yet be provisioned). After enabling this the instance/s must be re-provisioned.

Let us know if you have any issues.

That was already set to the current design node.  However, it still is not working.  I want the logs sent to an S3 bucket.  How do I do that?

This link does not say anything about that. https://knowledge.dataiku.com/latest/kb/setup-admin/dss-and-aws/modify-on-aws.html

After you enable event server in the FM virtual network and reprovision the node you can .

Then edit Settings - Event server to point to an S3 connection you defined. 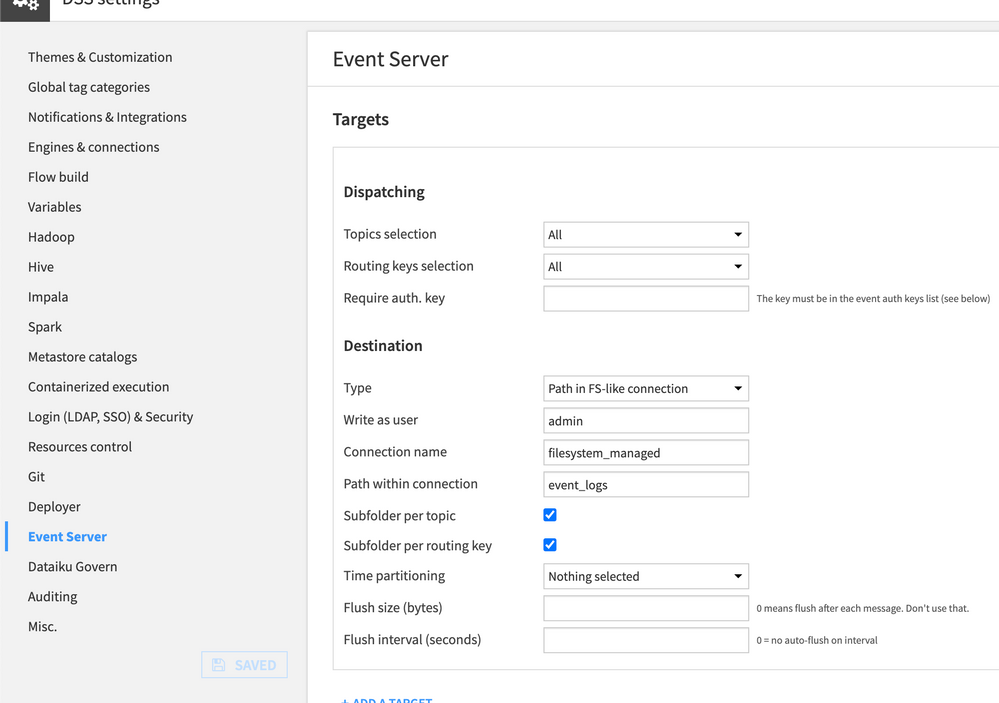 This design node will then write to this location.

For another node that you want to send events to the automatically installed event-server you can use the private IP of the node you defined as the event-server node.

If this is not what you are seeing we may want to continue this over a support ticket.

I have done all of this before even posting this original post.  It still is not working.  This still leaves all of the original questions of this post:

What should the Settings > Auditing > Targets > Destination URL be : the IP address of the Design Node, the https URL we have registered that redirects to the Design Node, or just `localhost` ?

What should the  the Settings > Auditing > Targets > Destination URL:PORT number be?  When I go to the S3 bucket "connection" I want the logs to be sent to, I don't see any port in the URL as some posts have said where to get it from.

What should the Settings > Event Server > "Write as user" be: `admin` or any user that has credentials registered in their Dataiku User's "Personal Credentials" ?  If it is the user name, which user name: `dssuser_first_last`, `First.Last`, `@firstlast` , `first.last@corp-email.com` ?  The user names are inconsistent across the entire platform.

Where can I see the logs of the Event Server?

Thanks for the clarifications. To answer your questions about auditing setup:

2) If you can use admin, it would be easier.  If you want to use a specific user, they would need to have write access to that S3 connection. The actual username would be the value of "login" is as seen under Administrator - Security - Users.

3) No need to include the bucket name the "path in bucket" will be within the root of the bucket defined in the connection.

So if you leave it blank it will create 2 folder apicall/generic in the root of the S3 bucket defined in the connection.

If you want to define within a subpath e.g you can simply define the path in bucket as "audit-data-dss"
Trailing/leading slashes are ignored. Slashes in between e.g auditpart1/auditpart2 are preserved

4) To check the logs go to Administrator - Maintenance - Logs -  eventserver.log

Let me know if you have any further issues.

The event server log error is below.  I have tried `admin` and a user that has explicit write access to that bucket saved in their user profile's connections.

Based on the stack trace this resembles S3 permissions issues. Depending on how you set up your IAM Policy it may be related to the actual path to the S3 bucket , "Resource" which DSS is attempting to write to.

Permission required by DSS would be:

If the above doesn't help I would suggest we continue this over a support ticket with the instance diagnostics and the exact IAM Policy used for that S3 connection so we can help further.