This website uses cookies. By browsing this website, you consent to the use of cookies. Learn more.
OK
Turn on suggestions
Auto-suggest helps you quickly narrow down your search results by suggesting possible matches as you type.
Showing results for
Search instead for
Did you mean:
Sign In
Try your hand at analyzing royal sentiment in Dataiku DSS! Learn more
Options

How to segment your data using statistical quantiles

How to segment your data using statistical quantiles

You can create statistical quantiles without code in Dataiku DSS in two ways:

In statistics and probability, quantiles are cut points dividing the range of a probability distribution into continuous intervals with equal probabilities, or dividing the observations in a sample in the same way. In the two examples below, let’s assume that you want to create quantiles based on a numerical column called “score”.

Configure the Windows recipe to reorder the rows according to the scoring column, enable the window frame with no limits set, and configure the number of quantiles you want in the aggregations screen in addition to retrieving all the existing columns. 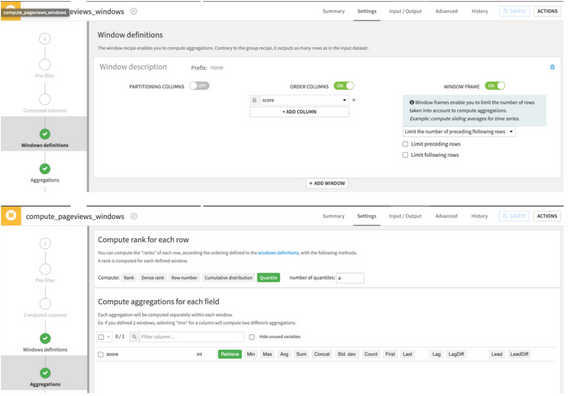 Configure the Split recipe with the “Dispatch percentiles of sorted data” mode, order the rows according to the scoring column, and assign each portion of the rows in separate datasets.

In addition, to interactively compute statistical quantiles, you can refer to the quantiles table of the Interactive Statistics worksheets.

For more details about interactive statistics, please refer to this course.

You can read more about different Dataiku DSS recipes:

You can also watch this presentation on Customer Predictive Analytics to learn how Dataiku DSS was used to perform data preparation. This resulted in using a machine learning algorithm to assess the probability of a customer returning to the website a certain number of days after their visit.