This website uses cookies. By browsing this website, you consent to the use of cookies. Learn more.
OK
Turn on suggestions
Auto-suggest helps you quickly narrow down your search results by suggesting possible matches as you type.
Showing results for
Search instead for
Did you mean:
Sign In
Community Conundrum 25:Feature Visualization is now live! Read More
Options

Scenario executions within Dataiku DSS are a key part of operationalization (o16n), and your organization may have many of them running every day. If you are using Jira to organize your support flow, you may want to have an issue automatically created when a scenario fails.

One way of doing this is to set up Dataiku DSS to send an email upon scenario failure, and then ingest this email in Jira using a mail handler.

An alternative we will showcase here is to use the Jira REST API. To be more specific, we use the /rest/2/api/issue endpoint. This is a POST request, and we will need to provide the issue details in the body as JSON.

You need to have a DSS node installed and an instance of JIRA running (be it Cloud or On-Premise).

In Dataiku DSS, you can use the tutorial project called “Deployment (Tutorial)”:

In this project, we already have a scenario:

We are all set from the Dataiku DSS side of things.

Now for Jira. We need to have a project at hand with a user allowed to create issues in it. In order to be authenticated with the JIRA REST API, we will also need an API token. You can check this page to see how to generate one.

This token is not what we should use directly for authentication as stated in Basic auth for REST APIs. We need an encoded version of it.

For that, you can run this unix command:

You will retrieve a string that you need to store and use in the header setup below.

In the scenario, you need to add a Reporter of type "Webhook" in the Settings tab:

Now let’s set it up:

Let’s explain the content here so you can customize it: 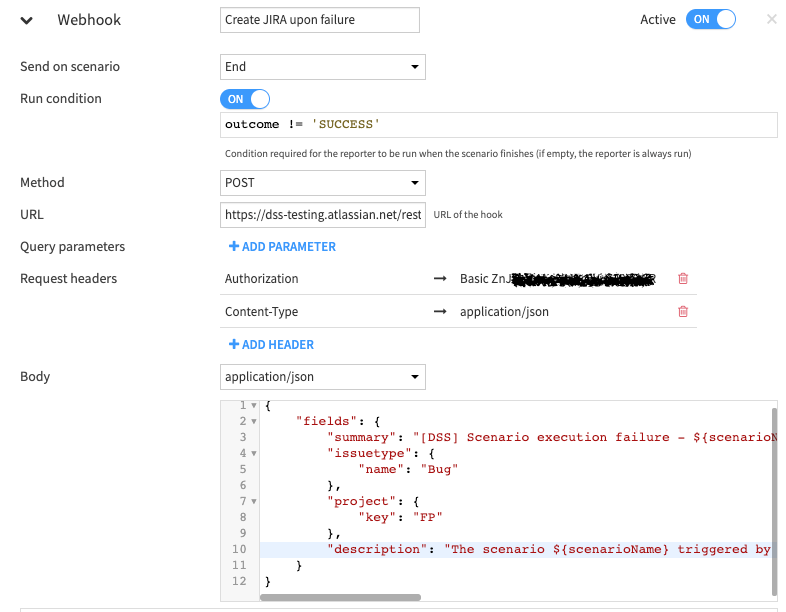 We are now ready to test by executing the scenario. As you imported the tutorials without running it, the scenario will fail, but the webhook will be executed. 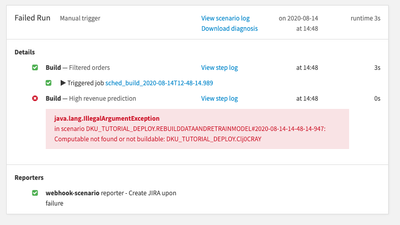 You can now log in to your JIRA instance and check for the issue: 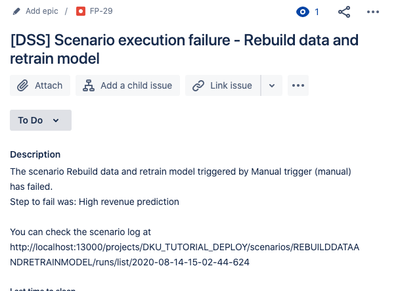 You can now enrich your JIRA with more data using all the options offered by the JSON body as described in the endpoint detail: The Jira Cloud platform REST API

You can also add more information from Dataiku DSS, on the scenario, the project of the failure using the Scenario variable, or even building your own string using Custom Variables.

For more information about automation scenarios in Dataiku DSS, please consult the relevant sections of the reference documentation or the Dataiku Academy for hands-on tutorials on automation.