Originally posted by Dataiku on March 17, 2021 by @Makoto

If you ever dreamed of visiting Japan, the best season is spring, when you can see the bloom of Sakura (the world-famous cherry blossom). However, you might need a little bit of luck. Sakura blooms only for a short period of time; seven days after the flowers open, they already start to scatter. There’s a big chance that you'll buy expensive flights only to miss the blossom period. This motivated me to build a prediction model for the bloom of Sakura using Dataiku DSS — check out the steps below to see how I did it (and, of course, the results!). 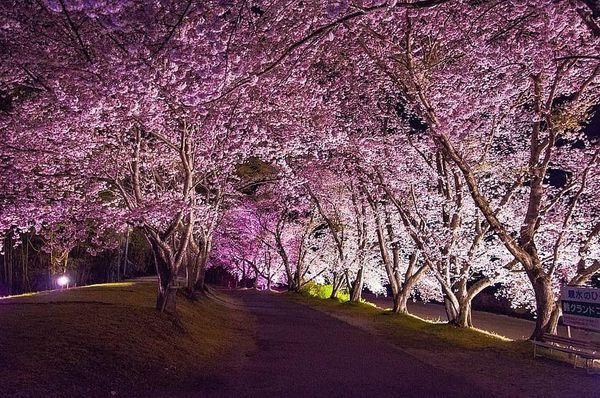 Comparison With Other Forecasts

Random Sakura Forest’s prediction was made on March 10. Sakura in Tokyo bloomed on March 15, so my prediction was already proven wrong for one of the three cities. However, both of the other forecasting websites missed the forecast for the city of Oita. They predicted Sakura would bloom on March 15, but (at the time of publishing this article) it hasn’t yet. My prediction for Aomori prefecture is the same as JWA.

Putting aside a severe mental breakdown for missing the prediction for Tokyo and therefore the scattered hope for the other two cities, Random Sakura Forest has one advantage:

It is a fully automated prediction system operating on a daily basis, made possible by a scenario automation feature of Dataiku DSS.

Everyday at 2 a.m., a Python recipe scrapes the weather information in the three cities from the previous day and updates the predictions like the chart below: 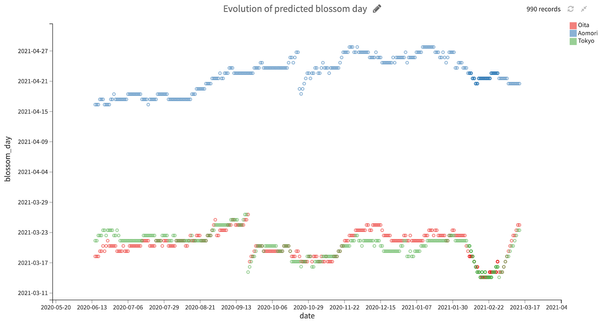 On the other hand, tenki.jp updates its prediction once a week, and JWA does it only once every two weeks. Now that many peoples' trips to Japan depend hugely on the precise blooming day, it is a big plus that you can get prediction updates every day.

The whole flow can be seen below. It consists of two zones: data pre-processing and machine learning.

Below is the data pre-processing zone. The inputs are daily weather data from 1991 until today in the three cities as well as the historical blooming days from the past 30 years. Daily weather data is scraped from the Japan Meteorological Agency using a Python recipe, and it includes average, highest, and lowest temperature, precipitation, and daylight hours.

The image below is how the machine learning zone looks. There are two models, scoring one dataset for each. These two scored datasets are combined to create a single prediction result.

I made it this way because I set the target variable to “number of days until blossom.” This target variable itself takes a value between 0 and 365 (or even more). But I wanted to tell the model to look at this as a cyclical variable, so that it can correctly assess the error. For this, I scaled the variable to a range of 0 to 2π, then decomposed it into sine and cosine. Therefore, one model predicted the sine value, another predicted the cosine value. I combined the prediction results and reversed it to a day unit.

And which algorithms did I use? Of course, random forest. Why? Because its name fits with the theme. That's the only reason.

A random forest with 500 trees and the maximum depth of 100 yielded the best result. I was able to reduce the error to four days.

No Importance on Precipitation and Daylight Time

One interesting finding is that the model favored only the temperature-related features. All the other features, such as precipitation and daylight hour, had very little impact on the result. 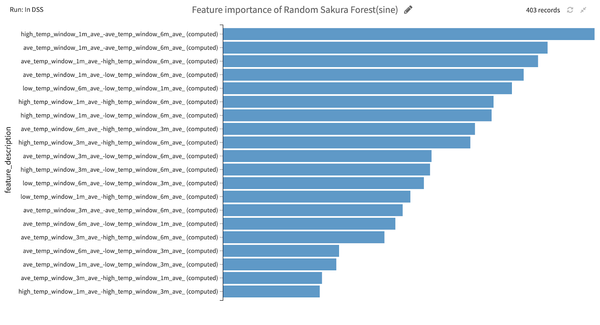 This made me wonder: Why did the model choose only the temperature-related features? I hadn’t been able to figure out the reason until I learned about one forecasting method used among Sakura researchers, which I'll expand on below.

In Japan, forecasting the Sakura blooming day is the daily news headline throughout spring. But how do these forecasters make predictions? Since the 1950s, a lot of methodologies have been addressed, including multiple regression analysis. Nowadays, most of the Sakura blossom forecasters use a formula based on a method developed by Yasuyuki Aono, Associate Professor at Osaka Metropolitan University, in 2003.

Aono’s approach is unique in a way that it’s composed of two parts well-incorporating the biology of Sakura trees. First, it computes a D-day, where the trees wake up from their sleep during the winter time. This D-day is computed from a place’s latitude, distance from the sea shore, and average temperature during January and March, which therefore depends on the place.

The second component is a value computed from a daily temperature using a formula proposed by Aono:

This value is added to the D-day and, when the accumulated value exceeds 23.8, we say that it’s the blossom day. By using future temperatures from weather forecasts, we can calculate the future values in the second component and therefore predict the blooming day.

What the Aono method tells us is that the blooming day depends solely on the place’s geographical position and its temperature, which is indeed consistent with my prediction result.

Sakura Genes Are Not Random

f you have ever seen the Sakura blossoms in Japan, you might have noticed that all of the hundreds of trees in one place bloom simultaneously. As a Sakura lover it is fantastic, but… isn’t it strange? Are they talking to each other like, “C’mon guys, party time!”?

Genetic research has revealed that the species of Sakura trees you commonly see in Japanese parks, Someiyoshino, is a clone of a single tree that originated from a hybrid of the two different cherry species. Over generations, this single tree was multiplied by grafting, resulting in all the Someiyoshino cherry trees having the same genes.

Now it makes sense. That’s why they flower at the same time, which implies Sakura trees are not random. Given that, do you think a single decision tree would predict better? Well, it’s your turn to try that out in Dataiku DSS! Also, check out this link if you would prefer to read the article in Japanese.

Build Your Own Predictive Model Today

Read this guidebook for details and visual demonstrations of tools and concepts that will help you design your own predictive machine learning model (and a crash-course refresher on some of the basic machine learning concepts!).