Confinements and Curfews, What's the Impact on Mall Attendance? A Case Study

Confinements and Curfews, What's the Impact on Mall Attendance? A Case Study

The retail industry navigated more than just turbulence in 2020 — some organizations faced drastic governmental restrictions on store openings, while others suffered from consumer absence due to fear of contagion. Recovery could be on the horizon for most retailers, but patience will be required until the health crisis is behind us.

To understand what happened in the past year, we carried out an investigation on mall attendance in Europe, a joint effort with our partner Kayrros, a specialist in alternative data. We leveraged their resources with the capabilities of Dataiku to process, clean, and analyze this data before creating visuals to illustrate our findings.

Similar strategies were employed across European borders to decrease the spread of the pandemic. Most European governments started by disturbing businesses with a stop-and-go strategy, closing and reopening malls according to public health indicators. As we will see, the observable effects of this strategy are dramatic. But how quick was the recovery after confinements? And what are the effects of new types of restrictions like curfews?

Seeking answers, we (once again) turned to Kayrros. We recently worked together on a related subject: investigating the recovery of the automotive industry following the first confinement last spring. You can read about the outcomes of this collaboration in this article. Now, with the economic activity of malls at the top of our minds, we asked Kayrros data scientists if they had any data recommendations. Spoiler alert: mall attendance dropped significantly for both confinement periods (20% to 30% of pre-COVID mall attendance during the first confinement and 45% of pre-COVID mall attendance during the second). Read on for the details on how we reached these insights. 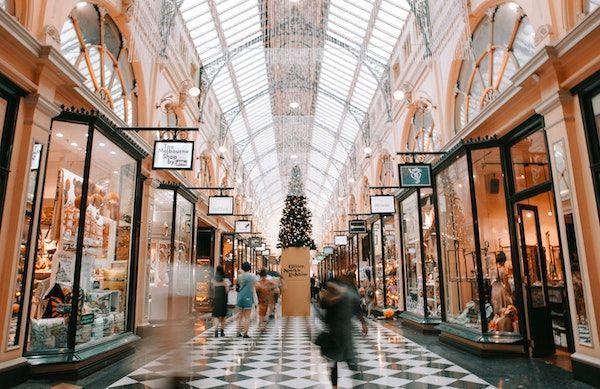 A Look at the Process

The mission of Kayrros is to capture and transform raw data into relevant analytics. Their asset observation platform is capable of leveraging data from many different sources: satellite images, anonymized geolocalization data, social data, etc. For this study, they took advantage of geolocalization positions to help us out. They sifted through their history to provide us with the day-by-day attendance of 442 malls across Europe (France, United Kingdom, Spain, Italy, and Germany). We looked back over one year to see the levels at which people were attending malls. 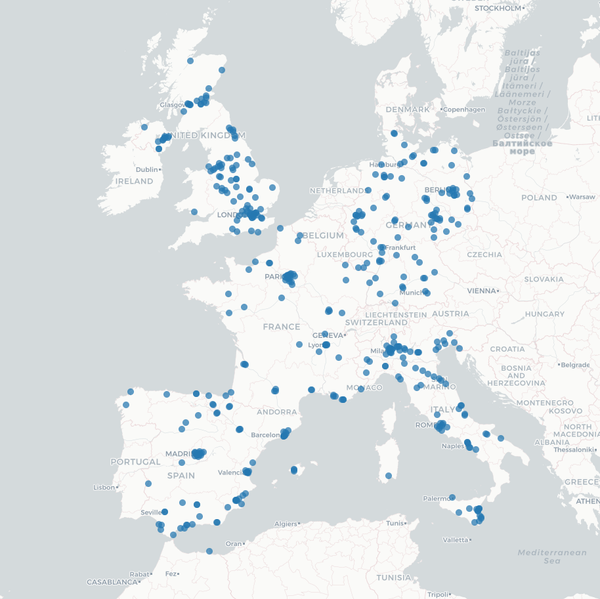 Location of malls included in the study

To study the impact of lockdowns and curfews on general retail activity, Kayrros sources pseudonymized geolocation data from partners and performs aggregations to anonymize the output.

Using the Kayrros API to retrieve the data and bring it to Dataiku, the investigation began. We focused on the French perspective of mall attendance before opening compared to other European countries. Dataiku’s data scientist team conducted the analysis. The first steps consisted of data combinations and quick analysis. After cleaning and formatting the data, for each country the daily attendance by mall was summed over the country using a GroupBy recipe, and then normalized using the average daily traffic in February 2020 using GroupBy and Join recipes.

Dataiku Flow of the project

Our Findings on French Malls

The main graph (see below) depicts the level of attendance (percentage compared to the average attendance in February 2020) over the period from the beginning of February 2020 (pre-COVID) to mid-February 2021.

The two confinement periods are clearly visible. The activity dropped significantly for both periods, in smaller proportions for the second confinement:

The French government allowed more categories of retailers to open during the second confinement period, which could explain the lesser impact on attendance.

The recovery phases also caught our attention. While the attendance comes back very gradually over six weeks after the first confinement, it picks up almost immediately following November 28, the date at which all “essential shops” reopened. This could be explained by the progressive reopening based on the categories of shops for the first confinement, while all non-essential retailers reopened at the same time after the second. An additional layer of explanation could touch on the psychology of consumers: they were probably reluctant to attend malls and physical stores right after the first wave brutally hit the country.

Contrary to what was expected, the usual Christmas shopping rush does not appear on our graph. The exceptional year recorded by the e-commerce sector could explain this relative quietness for physical retailers. 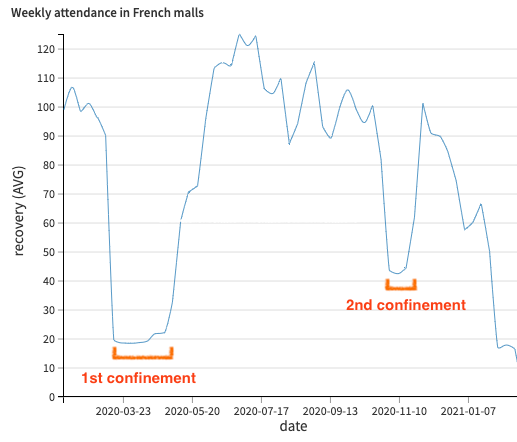 How Did Curfews Change the Game?

Seeing that the stop-and-go strategy of confinements was becoming cumbersome for the economy and driving weariness amongst the population, a new tactic was deployed in France after the new year: curfews, a simple but radical measure. No one was allowed outside during certain hours of the day.

The curfew started with a light format: from 9 p.m. to 5 a.m. and was quickly replaced by a more severe version from 8 p.m. to 6 a.m. Not seeing enough effects, the government progressively tightened the measures in mid-January according to the health conditions of different regions. By January 16, the whole territory was under a 6 p.m. to 6 a.m. curfew.

This gradual change in restrictions is clearly visible in the data. The graph below covers two time periods: the one before the 6 p.m. curfew and the one after. Before restrictions, attendance in malls was still high past 6 p.m. It changed drastically for the second period: numbers quickly fell down after 5 p.m. The remaining attendance during the curfew effective time could be explained by the employees of the malls working in restocking or cleaning the premises.

During weekdays, the shopping rush seemed to have been relocated during the afternoon. A look at the weekly attendance shows another interesting perspective (see graph below). Under the 6 p.m. curfew, the mall attendance decreased during weekdays and significantly took off during the weekends. Sundays seemed especially affected by this change.

For mall managers, this change in consumer attendance concentrates the efforts on specific time periods. Much denser traffic on the weekdays indicates more people in shops at the same time, as well as increased crowds shopping on the weekends. We can imagine the stress on workforce planning the curfew has generated. 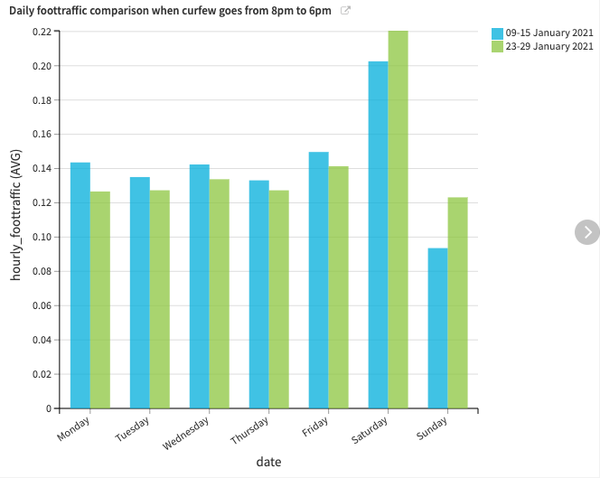 However, while attendance has shifted, it is worth noting that the overall level of attendance remains the same as before the curfew, meaning that even if the traffic is denser at certain time periods, malls did not lose over the total traffic of consumers.

One thing is sure, however, the sudden measure of regional mall shutdowns decided by the French government that began on January 31 slashed the attendance to record-low levels. The attendance dropped to less than 20% compared to the average, making it worse than the effects of the first confinement. To illustrate this with an example, one of the most visited malls in France named “Les Quatre Temps” located in the Paris business district only could open six shops over 230 including one supermarket, food retailers, and pharmacies. 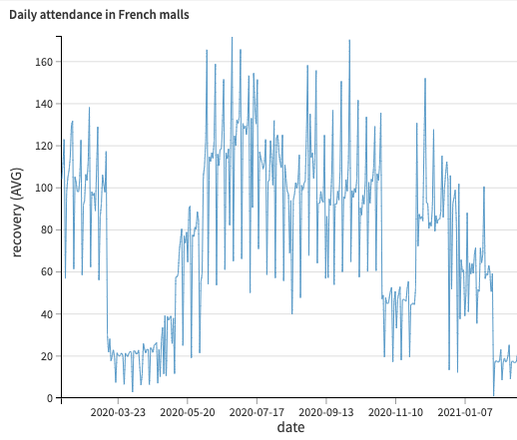 Same graph as earlier, but with a weekly view over time. Saturday peaks and Sunday lows are clearly visible.

A France vs. UK Comparison

Kayrros’s data allowed us to have a peek at the situation of other European countries. We kept the U.K. as the most interesting comparison point. The following graph shows each trend of attendance for the two countries.

The U.K. took more time before putting its first confinement in place, but contrary to France, the level of attendance came down progressively. The population did not wait for political measures to decrease their visits to malls. What surprised us about the U.K. is the very long recovery period that spanned over three months after the first confinement, when it only took a month and a half for France.

Unfortunately for France and the U.K., 2021 hasn’t started with encouraging figures. We explained the situation in France earlier in the article, but in the U.K., a third confinement decided just before Christmas has made the mall traffic plummet.

An Uncertain Prospect Before Summer

While the U.K. government shared its vision of a deconfinement in April, its French counterpart announced on March 4 that smaller malls will also have to temporarily shut down. The global picture is more difficult to grasp as each country seems to evolve differently, also influenced by the uneven progress of vaccines.

French malls are tied to the decisions of the governments for what concerns their full reopening, but the outlook is deteriorating as the health situation does not show signs of improvement.

This joint study with Kayrros allowed us to look in the rearview mirror to see what could be the effect of different restrictions on the retail industry. We did not venture to use Dataiku’s modeling capabilities to produce a guess of the situation in the coming months, as the constant changes of politics and unpredictable evolutions of the health situation would not allow the creation of a decent forecast. We will keep this analysis for the future, when more stable times will allow us to take advantage of Dataiku’s machine learning capabilities to get a sense of the upcoming attendance in malls.

This study however showcases the multiple possibilities offered by such alternative data. In more steady times, having a precise view of mall attendance could help drive many operational functions across a retail business, from human resources with workforce planning to supply chain and stock management. On a more strategic level, the attendance data could be critical to help retailers find locations for new stores. And at large, mall owners themselves could benefit from these insights to better pilot their assets. If you have any questions or want more information on the case study, reach out to Hugo Schmitt at hugo.schmitt@dataiku.com.

What factors are fueling the rapid growth of alternative data, specifically in the finance sector? Find out in this ebook, along with relevant use cases that show how organizations can drive value with alternative data.