I have a question about a possible compatibility between MinIO and DSS.

By reading the documentation I have noticed that MinIO is not listed in the supported DSS data sources.

MinIO, however, is compatible with Amazon S3, which is supported by DSS.

So I've tried to set up and Amazon S3 connection in DSS. The connection itself seems to work fine as shown in the screen below

But when I tried to create a dataset by using this connection I run into this error:

Browse failed: Failed to connect to S3, caused by: AmazonS3Exception: The AWS Access Key Id you provided does not exist in our records. 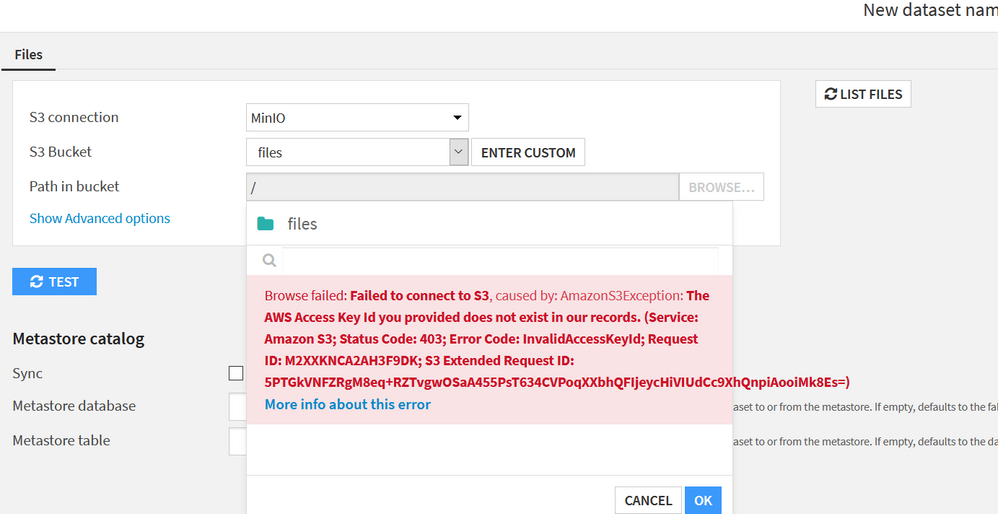 The strange fact is that DSS is able to enumerate the buckets, but when trying to browse the bucket content it returns that error.

Has someone ever experienced something like this before? Can you help me trying to figure out what's the problem? Is it a configuration problem or is it just and incompatibility issue?

Let me know if you need additional information.

Any help is strongly appreciated.

Could you please try unchecking the "Switch to bucket region" checkbox (under the Region/Endpoint field) and checking the "Use path style" checkbox down in the Advanced section of the connection settings?

Could you please try unchecking the "Switch to bucket region" checkbox (under the Region/Endpoint field) and checking the "Use path style" checkbox down in the Advanced section of the connection settings?

I solved the problem by unchecking "Switch to bucket region" checkbox.

Thank you very much.