This website uses cookies. By browsing this website, you consent to the use of cookies. Learn more.
OK
Turn on suggestions
Auto-suggest helps you quickly narrow down your search results by suggesting possible matches as you type.
Showing results for
Search instead for
Did you mean:
Sign In
Community Conundrum 10: The Titanic is now live Learn more
Options

Has anyone figured out how to Map US Census FIPS codes

Has anyone figured out how to Map US Census FIPS codes

It has a FIPS code.  No GeoPoints of Lat Lon.

SO it looks like I have to do some Geo Location work here.

I see this discussion. https://www.dataiku.com/product/plugins/us-census/

Has anyone worked this out.

Is there a Python or R library that would make this easy?

The US Census plugin won't be useful in your context since it enriches data with US Census data not performing reverse geocoding. I believe what you are looking for is here in in the gazetteer files, spot the US Counties : https://www.census.gov/geographies/reference-files/time-series/geo/gazetteer-files.html

Thanks for the suggestion.

In looking at this several times, I've not found a connection between the fips, codes in the NY Time data and the census data that tells something about the location of the areas.

Maybe I don't really know what a fips code is.  (in the case of the NY times data this looks like it is somehow connected to a county.

I see that you posted this a while ago but, I just became aware of it. I also used the NYTimes git data to create a few dashboards on the number of deaths and infections from COVID-19 as well as the infection and death rates per 100,000 population. I just recently added a few dashboards using the  "2019_Gaz_counties_national.txt" file from  Gazetteer Files to provide the lat/long that I used to create geopoints.

The link between the NYTimes data and the gazetteer file is the fips code but, it's not readily apparent. The fips code is buried in gazetteer file as the first five digits of the "GEOID" column. The first two digits are the state, the next three are the county and the last six dig deeper into cities, hamlets, and smaller entities. Because the the filled map only requires any point within the county, I selected the last lat/lon associated with the fips code and used that to create the insights for the dashboard. I attached a screenshot of the California insights below.

The data is updated from the NYTimes git daily. 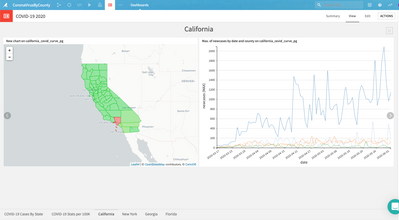 If you're still working on this and have questions, let me know, happy to help.

Thanks so much for this insight.  The Census has some really interesting data.  However, they DO NOT make it easy for one to figure out how to gather and use this data.

Thanks for part of the rosetta stone.

Here is what I've been able to do with this data. 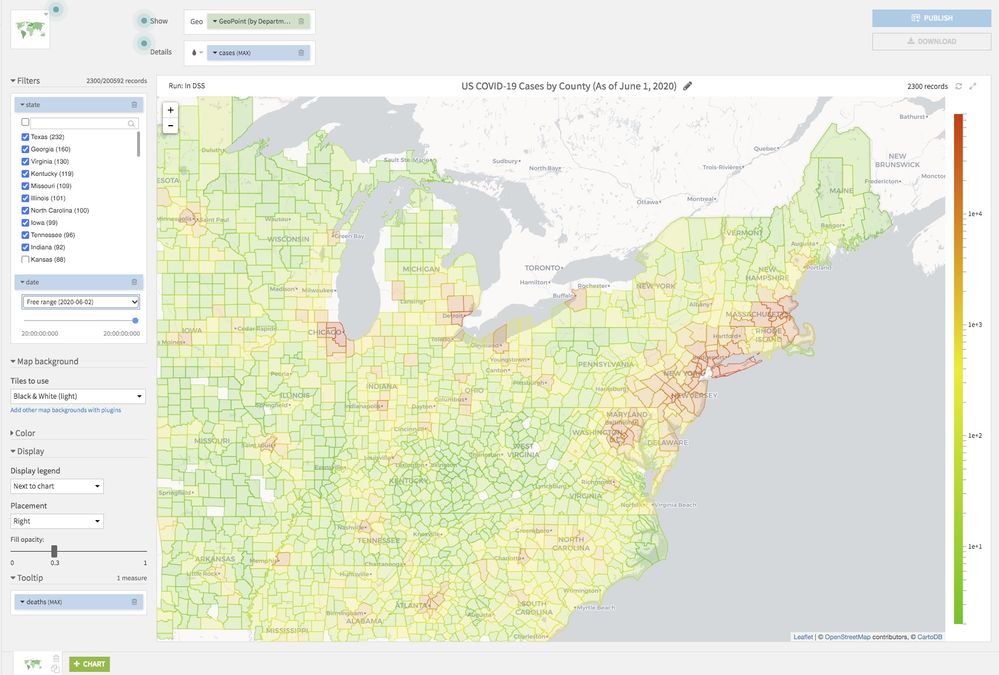 “Data from The New York Times, based on reports from state and local health agencies.”