Can I control which datasets in my Flow get rebuilt during a scenario?

Can I control which datasets in my Flow get rebuilt during a scenario?

When configuring a Build/Train step in an Dataiku scenario, 4 different build modes let you control which items in your Flow are rebuilt or retrained when the scenario is triggered.

In the Steps tab of your Scenario, click Add Step and select Build / Train. 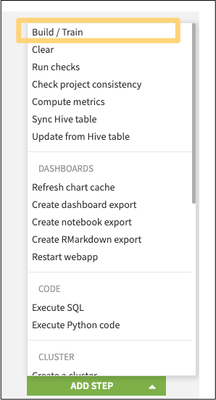 Next, select the item you would like to build (a dataset, folder, or model). In the options below, you have the option of 4 different build modes to control which datasets and upstream dependencies are executed each time the trigger fires.

Note that in all of these cases, if a dataset is built, its siblings (other outputs of the source recipe) will also be built. If you specify multiple datasets in the same build step, they will be built in parallel at run-time.

In addition to scheduling automated jobs, monitoring those jobs and the status and quality of the resulting datasets is also important. You can learn more about operationalization with this series of hands-on tutorials.