Description:
Ericsson provides high-performing solutions to enable its customers to capture the full value of connectivity. The Company supplies communication infrastructure, services and software to the telecom industry and other sectors.

The IP Multimedia Subsystem, or IMS, is a core network technology that provides Communication Services to people in wireless and wireline networks. These services range from Voice and Video (e.g. over 4G and 5G) to Emergency Calling and Enriched Messaging. Typically, IMS is offered in the form of network functions as software, and it is deployed on a specific operator’s private cloud infrastructure.

Before deploying/instantiating IMS network functions to provide the aforementioned services, a dimensioning process is conducted by the supplier (e.g. Ericsson) in order to estimate, based on the network’s user traffic model, how many resources (in the form of CPU Load or Memory) will the IMS network functions require from the target cloud environment so as to serve those subscribers accordingly. In other words, dimensioning is the process of predicting how much CPU Load, Memory, Storage and Networking would be required.

Dimensioning of IMS or any Ericsson products and services with the highest accuracy is critical, so that a proper offer is submitted to the potential Ericsson Customers. This is also key to avoid contractual penalties, which in case they are incurred, can impact Ericsson and customer trust above all.

Due to the high stakes and complexity the dimensioning task has, the process needs to be conducted with a human-centered approach supported by interfaces and a trustworthy calculations backend.Given that our IMS network elements generate statistical traffic data (in the form of Performance Management counters), data-driven ways to perform dimensioning are identified as the next evolutionary step to address these important needs.

Before Dataiku DSS, the overall challenge we faced was to actually have a Machine Learning-based backend which could take this traffic statistical data, treat it and deal with everything we needed in terms of model training and inference for dimensioning, while having the ability to interact with it, as a service (black box), via Rest API calls only.

The approach above would enable us to build a Web Application in front of this Machine Learning backend, in order to address our user-centered needs, while achieving high accuracy, as depicted below. Our application has a working title of Data-Driven CANDI (CANDI = Capacity and Dimensioning): 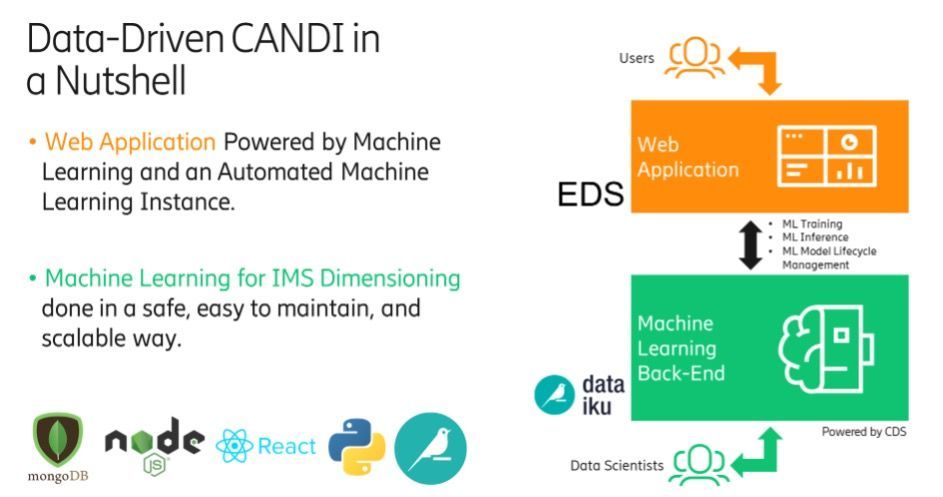 Dataiku DSS allowed the successful realization of the whole concept we were after. More specifically, the major pain points Dataiku addresses for us are:

We have a systematic flow that takes the data from a MongoDB database after the user uploads it via our WebApp. The following depicts a figure with the flow that every project of Data-Driven CANDI typically has.

Via the WebApp, the user is able to request that a new ML model is trained for its dimensioning needs. This is translated into a scenario execution that takes care of running the above flow. DSS connects to the data from the MongoDB instance, prepares it, and then runs an AutoML workflow. The best model is selected and finally deployed, so that the user gets the necessary predictions for dimensioning via the exposed Rest API endpoint for inference. Feedback on what is happening under the hood is continuously provided to the user via the WebApp.

The following depicts all the steps created for the scenario execution, and specifically the AutoML step: 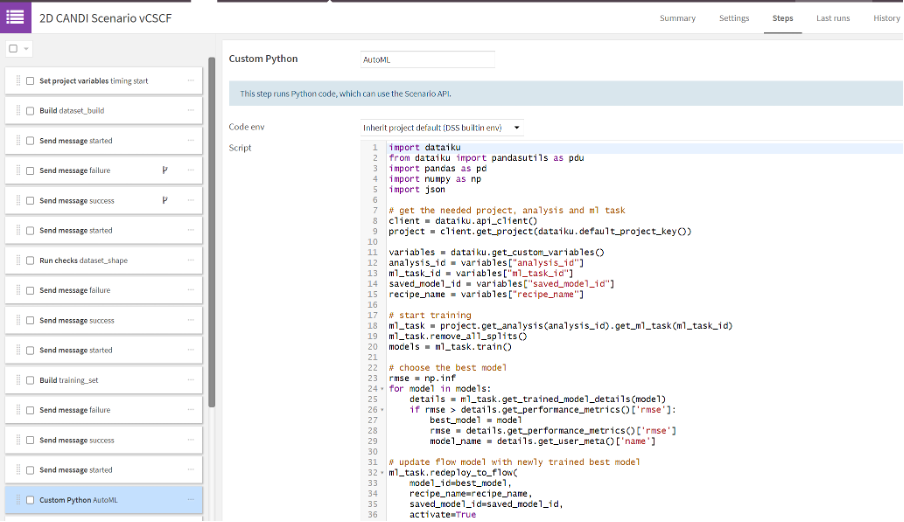 The resulting dimensioning estimators have high accuracy. This is based on the data science work we have done around this, and the custom plugin we created for the modeling phase, which deals with the very particular aspects of our data to ensure generalization of our models. The following picture shows the specific custom plugin used:

Data-Driven CANDI as a whole is meant to provide considerable savings (~90%) in R&D costs compared to that of the current dimensioning tool.

Moreover, it will provide us with the possibility to understand how our IMS software performs over many different networks with different Cloud Environments characteristics, beyond the ones we use internally in our labs for IMS verification. This all translates into achieving accuracy levels we never had before, and thus, increasing our forecasting and customer’s trust along the way.

Explainability in the Telecommunications industry is important to achieve as well. The possibility to provide explainability into all of our dimensioning models to the Data-Driven CANDI user is something very important to trust in this system, and ultimately for the customer to also trust in the predictions obtained from the system and forecasting capabilities

The way Data-Driven CANDI has been architected is innovative in the sense that all the complexity of dimensioning is hidden from the user.This means that the dimensioning user is still able to perform its task trusting that the system will provide an accurate result. Moreover, this architecture and approach allows the possibility to expose the WebApp directly to our customers, so that they are enabled to own and plan their network CAPEX in terms of IMS and cloud resources.

Our approach has the potential to be generalized beyond IMS products (i.e. to other products in Ericsson such as 5G Core, 5G New Radio, etc.).

You may find out more about our modeling strategy in the Ericsson’s next-gen AI-driven network dimensioning solution blog article.